About 250 have sold in New Zealand, 206 of them the pure electric model, Hyundai New Zealand General Manager, Andy Sinclair says.

And demand is growing month by month, he says.

“We’re confident of the IONIQ’s future here and are excited about the growth of the electric vehicle category in New Zealand.”

It’s taken the awards circuit by storm too.

The IONIQ is among the first cars in the world to have separate hybrid, full electric and plug in hybrid powertrains within one body type, with the plug-in hybrid arriving here just before Christmas.

“It’s been a massive year for the IONIQ,” Sinclair says.

The IONIQ’s is the country’s best-selling new Electric Vehicle and many of the new cars brought in during November have been grabbed by car share firm Yoogo in Christchurch.
Prices for the IONIQ start from $46,990 for the Hybrid, with a three-year factory warranty included and the high voltage battery covered for 10 years from registration.

The EV It has a range of around 210km, although Hyundai New Zealand say they’ve driven it 238km from Mt Maunganui to SkyCity in Auckland on one charge.

Customers like the fact that the pure electric IONIQ is cheap to run and service, is quiet and smooth and that it’s emissions free while being stylish.

It has plenty of zip too, getting up to 100km/h in about nine seconds.

The model mix is available with a variety of accessories and extras, with an optional one for the all-electric IONIQ being a fast charger wall box which can boost it to full charge in about four or five hours.

That compares with about 16-18 hours charging on a normal household plug overnight, when EV owners usually opt for cheaper power rates.

Hyundai is set to make a further splash here in 2018.

Taking advantage of the growing popularity in SUVs and electrics, the Hyundai Kona SUV is expected in New Zealand towards the end of this year. It’s reported to have a battery pack exceeding 50kWh with a real-world range of over 350km.

Find out more about the IONIQ EV 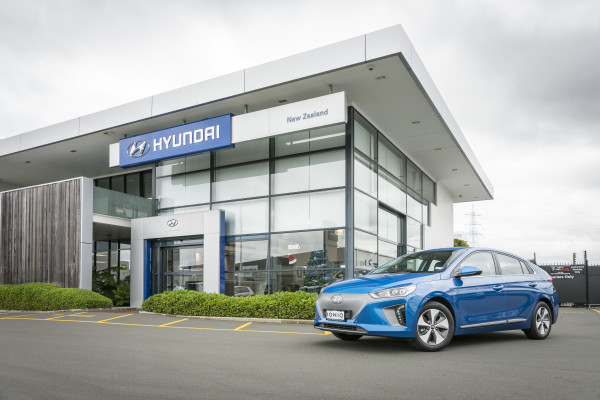