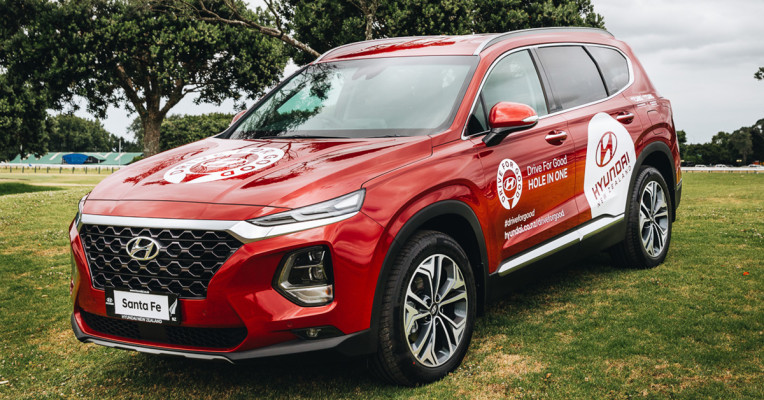 There are few things greater than getting a hole in one, but being able to say you got a hole in one and won a brand new Santa Fe for a great Kiwi charity, that’s in a league of its own!

Following a successful introduction of Drive for Good last year, players at this year’s 100th New Zealand Golf Open will again play for the chance to win the award-winning all-new Hyundai Santa Fe, worth over $75,000, for one of three Kiwi charities.

Hyundai is calling for Kiwis to head to www.hyundai.co.nz/driveforgood and let them know which of the three selected charities they would like to see take home the Santa Fe. Charities include Habitat for Humanity, St John and Spirit of Adventure Trust. If any player at the NZ Golf Open hits a hole in one on the 10th hole, the charity with the most votes at the end of the tournament will be four wheels better off.

Kiwi motorsport star and Hyundai New Zealand Ambassador Hayden Paddon will be playing at the tournament and fronts this year’s Drive for Good campaign.

“It’s an honour to be part of the first Golf Open in the world that will see a charity take home such a generous prize. I always give 100% in everything I do, but just knowing that I have a chance, however big or small, to win an incredible prize for a deserving charity, is definitely extra motivation to give it everything I’ve got.” he says.

“Drive for Good puts a spin on the traditional hole-in-one competition to support the charities that support us,” says General Manager, Andy Sinclair from Hyundai New Zealand. “Playing for charity like this at a Golf Open is unique to New Zealand and it’s exciting to see our Drive for Good campaign gaining traction.”

“The New Zealand Golf Open is a prestigious event and we’re excited to be able to give three deserving charities an opportunity to be involved with the tournament and have the chance to win this much loved vehicle.”

The end result lies heavily on the golfers hitting a hole in one on the 10th hole, but if it doesn’t happen the voting will not be in vain, as Hyundai will make a cash donation to each of the charities relative to the voting results.

For more information or to vote for the charity you would like to see win a brand-new Hyundai Santa Fe, please visit www.hyundai.co.nz/driveforgood